This article visits the regions of Graves and Entre-Deux-Mers as an example of the harvest season in Bordeaux.

The harvest comes in fall, or late summer, around the world. After months of meeting in partnership or contrast with mother nature and their grower, the grapes are headed inside. Here they’ll perform as the science experiment of our dreams: turning from fruit into wine, mostly by their own natural accord, led by estate staff.

I opened a bottle of white wine this week, and with it I released the promise of 2014. In that year, growers were enthusiastic with relief as the yields were improved from difficult 2013. Bordeaux was warm and sunny during  this harvest, which for the wine in my glass, began the first week of September. My bottle gave those days to me as a gift, a delivery from the past to decorate an evening with my husband.

A certain bottle started this line of thought. 2014. From Bordeaux, a light and fresh and distinctively white-fruit fragrant bottle. Château Sainte-Marie Vieilles Vignes is pale in color, balanced, complex and enduring in a citrus finish. It comes from a region in Bordeux called Entre-deux-Mers. If you know anything about the French language, you can guess at the translation of this spot’s name: between two seas. While the Dordogne and Garonne are two rivers, they are “influenced by ocean tides that behave like inland seas”. 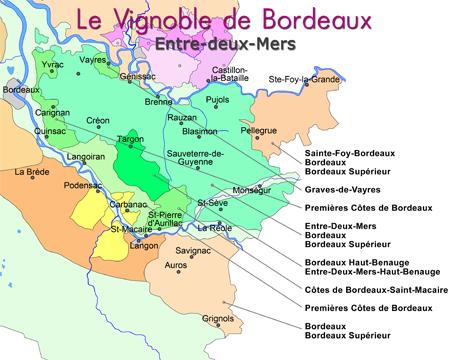 According to Wine Searcher:

Entre-deux-Mers occupies a substantial slice of the Bordeaux region, stretching from the Bordeaux city in the west almost all the way to the farmland outside Bergerac in the east. The landscape is mostly fertile and green, rolling gently between 33 and 330ft (10–100m) above sea level. However, vineyards have replaced some of the green landscape, with large patches of land being rapidly turned over to viticulture. The soils here are predominantly of alluvial type (sand and clay in varying proportions) – which is to be expected, given its name and location.

Château Sainte-Marie is run by the Dupuch-Mondon family as it has been since 1956, though wine has been produced there since the late 1800s. Ancient redwoods symbolize the history and persistence of the vegetation of this land. Stéphane Dupuch took over the lead from his father, Gilles, in 1997. A man of passion for the estate and relationships required to run it, Stéphane persists with what the estate calls “clean, sustainable husbandry” of the vineyards. The estate employs a Terra Vitis certification for their methods. In each country, there are several certifications and and statuses achievable of sustainability, each one undoubtedly unique but pointed toward land stewardship and quality vineyards. The Terra Vitis approach is described as:

Terra Vitis shows the inseparable link between vines and terroir in Latin. In 1990, some Beaujolais vinegrower-winemakers decided to adopt and formalise integrated eco-friendly vinegrowing techniques. The aims of this approach are clear-cut:

Meet consumer requirements, Respect the environment and terroir, Be competitive.

A wine that is signed Terra Vitis is the assurance of shared moments of well-being set around wine. By choosing a Terra Vitis wine, the consumer is committed to safeguarding the environment and vinegrowing countryside alongside our vinegrower-winemakers and will enjoy a healthy, quality wine that has been crafted using natural methods that respect Man and the land.

In 2009 and the family purchased Château Peyredon LaGravette, an ancient manor house and vineyard property in Haut-Médoc which gained Cru Bourgeois status in 1932.

Readers of L’occasion know that I turn to my husband for kitchen inspiration (and, frankly, kitchen ‘labor’). Well, he has a secret weapon himself, a man he turns to when in need of a jolt of ideas or know-how. That man is Jacque Pepin. Jacque recently made a tomato gratin on his show and duration of the episode was interrupted with our commentary: We want one! We need to make one!

Later than reasonable one night last week, we used the last of our tomato harvest, which felt symbolically connected to the harvest in Bordeaux. We snacked on the gratin and opened the bottle from Château Sainte-Marie. The next night, we wanted another one…so my daughter and husband went out into the cicada-night and searched for a few unseen, un-plucked tomatoes to bring in for the second round.

The night harvest of tomatoes…it should be a culinary tradition for Midwestern families. The meal and the wine were a well-played match, though we added basil and mozzarella cheese on the second night, giving the gratin a more sustainable mouth-feel which was slightly better for the wine. Easy to make, and timed perfectly for the end 0f summer, this recipe is a necessary addition to the family cookbook; find it here.

Each month, the French Winophiles gather on their blogs and on twitter, illustrating the best in French food, wine and travel. We are finishing up our visit to Bordeaux, and we invite you to join the following writers and bloggers:

Michelle from Rockin’ Red Blog is Diving Into Bordeaux Wine with Winophiles: Graves

Here on L’occasion we are celebrating Harvest in Bordeaux

Join us Saturday, September 17th at 10:00 am central for a live twitter chat using #Winophiles and share your favorite food, wine and travel experiences featuring Graves and Entre-Deux-Mers.

Join us for our upcoming tours:

18 thoughts on “Harvest in Bordeaux”