I’ve read a lot of fiction in my day and I’m always hooked on a great setting. It doesn’t have to be sensational or mythical, but when the author creates a real place –  a patch of filigreed moss in the primordial woods of Virginia or the view of a valley from a crumbling garden wall in the English lake country – I’m hooked.

Hooked because I’ve been there, now that I’ve read about it. I’ve heard critics accuse writers of taking liberties when they write of a place they’ve never been, but I find just the opposite to be true: writers are writers and readers are readers because we can’t be everywhere. Not in this lifetime plus the next. If we lived out the stories that take place on every moss patch and garden wall, we’d need immortality.

So, when I tell you that I haven’t actually been to Corsica, I hope you’ll trust me anyway.

I write even when I’m not a top-notch expert on the subject. I’m just paying attention. You might be interested to know that I’m a fiction writer, have been for years, but on L’occasion, nothing is ever fictionalized. It doesn’t have to be, truth is richer than fiction when it comes to wine. Every bottle tells a story…it is my job to notice it and tell it…and hope that it is your job to learn from it, just as I have.

When the opportunity arose to write about Corsica, I was ready. I’d heard about the island, the immense diversity of this rather small space (greatest length is 183 km and width 83 km) floating in the Mediterranean Sea. On Corsica, visitors get their share of rich coastline with white sand beaches, snow-peaked mountains and nature’s artistic-side cliffs. Corsica is a French territory with Italian influences, but it is a culturally and ecologically independent place, with a native language, a proud history and distinct climate.

The inverted triangles symbolize mountains in this map of Corsican wine regions.

The vineyards have been cultivated for over 2,000 years and are France’s only island vineyards. According to Provence WineZine:

“There are nine Appellations of Origin (AOCs, now AOPs). The two major AOCs are Ajaccio and Patrimonio. The others are Corse Calvi, Corse Sartene, Corse Figari, Corse Porto-Vecchio, Corse Coteaux du Cap, Muscat du Cap Corse, and Corse. There are just over 100 AOC producers although the vast majority of wine–over twice the combined amount of the AOC’s production–is made under the less stringent category called Vin De Pays (VDP) de L’Ile de Beauté. (The European Union equivalents are Appellation d’Origine Protégée or AOP and Indication Géographique Protégée or IGP, respectively.)”

Corsica bears a continental climate as well as Mediterranean atmosphere. The island is earthly in so many ways, comprised of various soils including limestone, clay, volcanic, sandstone and granite. Wind is a second parent, in partnership with the Earth, as the fabled Mistral blows from the north even as the Sirocco cuts up from the south. Being on Corsica is a reminder that we exist with the elements, and the vignerons here embrace the elements as they do what they can to coax them into the best expression of Corsican wine.

Vermentinu (also known as Vermentino or Rolle) is the island’s primary white grape, for the reds, nielluccio is primary. Nielluccio is done well in Tuscany, known there as Sangiovese, but with fully unique expressions on Corsica that would leave many questioning if these grapes were indeed related. A varietal called sciaccarellu is an indigenous stronghold, a grape with rustic, herbal, smoky tones.

“Terra Vecchia and Clos Poggiale are in the Costa Serena region on the east coast of Corsica, 6 km from Aléria on the road to Bastia. They stretch between the coastal “Etang Diana” and the Pianiccia foothills amongst wild olive, arbutus and mastic trees. An outstandingly beautiful location – a true Garden of Eden.”, according to the domaine.

When I began my research for this story, I wanted to make a connection with a Corsican wine producer. It seemed the best way to get an impression of how wine grapes are grown and wine is made on this island. I reached out to Domaine Terra Vecchia and Clos Poggiale. As much time as I’ve spent learning about French wine, southern French wine, Mediterranean French wines…but Corsican wines are decidedly something unique. Even their grapes, which on paper are the same as those grown on the continent, are expressive in a way that demands a closer look.

The wines in the portfolio of Domaine Terra Vecchia and Clos Poggiale are created by Jean-François Renucci, a man who produced his first independent release in 2013 (prior to that, he’d worked with a local cooperative). He cultivates over 200 hectares, including vineyards planted in the 1960’s by Francis Skalli. According to the domaine: 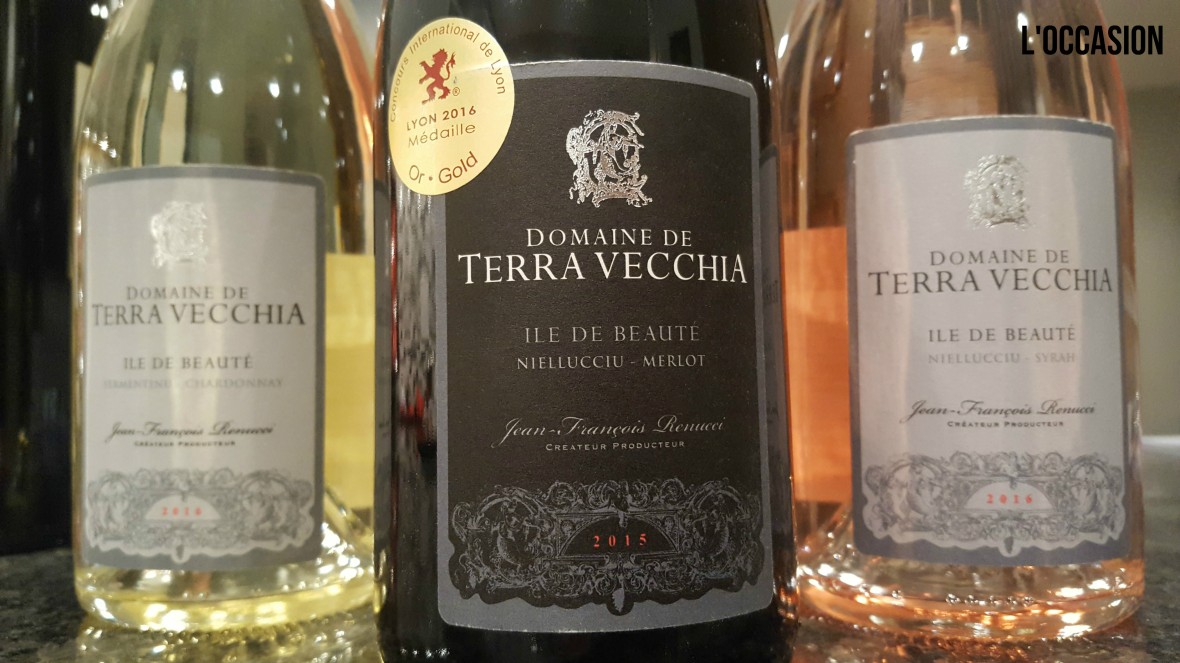 “Terra Vecchia, meaning ancient lands in Corsican, mostly lies on the edge of the Etang de Diana and its vineyards are classified IGP and AOP Corse. In the area nearest the sea, the poor, filtering, silt and sand soil and the obvious coastal influence are ideal for growing many native and international grape varieties: Nielluciu, Sciaccarellu, Vermentinu, Aromatique Biancogentile (an old local variety, far too often grubbed up in Corsica and replaced with Muscat but which Jean-François Renucci replants immediately). These all thrive alongside Merlot, Pinot Noir, Chardonnay, the Cabernets, Cinsault and Muscat of Alexandria.This diverse range of varietals enables the crafting of numerous blends and produces a wide range of highly aromatic and refreshing wines.”

Rouge 2015 50% Niellucciu, 50% Merlot – Bright crimson robe, maquis (wild scrub that covers a segment of the island) notes. Chocolate, spice and freshness. This is an elegant wine that can be enjoyed for the pleasure of sipping, or paired with a charcuterie plate or even pizza. A note on charcuterie: I hear the Corsicans are fabulous with it.

Blanc 2016 60% Vermentinu, 40% Chardonnay – Pair with oysters or seafood to bring out the expressive nature of this terroir-driven bottle. Expect a complex bouquet, full of citrus, gentle flowers and a touch of mint, even a dash of boxwood.

Rosé 2016 60% Niellucciu, 40% Syrah – Red fruit flavors with a long finish. An excellent sea-side rosé. With the strong balance of Syrah in this bottle, I would buy two bottles and allow one to age a bit to bring out the second round of characteristics.

“Clos Poggiale, classified AOP Corse, differs from Terra Vecchia in terms of its soils, which are deeper and made from granite and a type of red clay. It covers 30 hectares inland in the fold of the Plateau de Pianiccia. The air currents regulate the temperatures and help the grapes to ripen smoothly assisted by the beneficial influence of the Mediterranean. Here, the Syrah and Niellucciu for the red wine and the Vermetinu for the white wine, take on a denser more natural expression characterised by their minerality and the garrigue.”

Rouge 2013 55% Niellucciu, 45% Syrah – “50% aged in barrels (1/3 of which are new) and the other half aged in concrete tank. Blending at the end of the ageing period”. The Niellucciu brings out maquis (an herb in the realm of garrigue, muscular and rustic) herbals. The domaine suggests, “Basque-style chicken or some of the famous Corsican specialties such as Stufattu (meat marinated in red wine and herbs), a leg of lamb with maquis herbs or charcuterie” as an apt pairing.

Locations Corse comes from Dave Phinney’s Locations line, and I’m presenting this as a wine to note. I stopped into my local shop, The Corkscrew (online orders available) and mentioned this project on Corsican wines. The proprietor said that she had a vermentino that everyone was nuts over. She sold me a bottle of Locations Corse. After I got home I sent a note asking the vintner why the Corse label differed from their landmark, bumper-sticker, place-driven label.

The traditional package, F for France

I was told that the traditional knife depicted there was a deeper nod to the culture of Corsica. Locations Wine have been widely well-received and their packaging is very recognizable. The fact that the producer would part with this instant credibility to present this particular wine as culture-forward tells me that Corsica is symbolic, inseparable from heritage and tradition.

Also, everyone that speaks of Location Corse, raves a bit; it’s damn delish. So there’s that. For more on the line, see their website.

FRENCH WINOPHILES, AT YOUR SERVICE

This month we welcome the following writers and bloggers, each author of their piece of the Corsican puzzle. We welcome both Winophiles veterans as well as new-comers to our group; this brings a great element of perspective and expertise.

BE SURE TO PULL OUT YOUR PHONE AT 10AM CENTRAL THIS SATURDAY, FEBRUARY 18TH. POP IN THE HASHTAG #WINOPHILES AND FIND OUT WHAT WE’VE LEARNED.

Join us, the Corsica-loving group:

LYNN FROM SAVOR THE HARVEST HAS GOT ME CURIOUS WITH HER POST: THE INTRIGUE OF CORSICAN WINES

MICHELLE FROM ROCKIN RED BLOG IS TAKING US ON AN ADVENTURE IN CORSICAN WINE: A METAMORPHOSIS OF ISLAND CULTURE

JEFF FROM FOODWINECLICK! IS BRINGING CORSICA ALIVE WITH AROMATIC FISH AND A CORSICAN

Please accept our invitation to join us on the third Saturday of each month. If you are blogger, please welcome this opportunity to be a part of the French Winophiles. If you are interested in wine, food and travel in France, please be present at our twitter chats (10 am central each third Saturday, #Winophiles).

Our schedule for the year can be found here.

Thank you to le Domaine de Terra Vecchia for providing samples for this story. Not just for their generous offer to ship me wine from Corsica, but for their willingness to educate me and make a connection. Upon my first email they were responsive and friendly and enthusiastic. They ship to many states in the US — try some this summer! 19 thoughts on “Corsica: Making Wine on an Island”