Burgundy, known as Bourgogne in France, is one of the world’s most incredible wine regions. Due to an intense history dedicated to winemaking, there are stories to be told, lifetimes to preserve. Let this video, from Bourgogne Wines provide an introduction:

Vineyards in Burgundy have been cultivated for over 2,000 years, first by the Romans and eventually established by the church as nobility and monks and dukes not only cultivated vines and crafted wine, but spread the word about what was being done in their region. It was here that the barrel became more popular than the amphora for wine transportation and terroir became a notable practice for finding the perfect place to grow grapes. When the French Appellation d’Origine Protégée (then Controlée) system was established in 1936, Burgundy vineyards were among the first to adopt the system.

The Abbey of Cluny

In the village of Cluny in the the Mâconnais, located in the southernmost start of Bourgogne, lies a spot of ancient monastery called The Abbey of Cluny. Founded in 1910, Cluny Abbey was heart of the largest medieval monastic order in the West for three centuries, until the reconstruction of St Peter’s Basilica in Rome in 1506. For centuries, until the Revolution, the church was a primary influencer in the production and consumption of wine, which was cultivated widely for not only church use but to manage the thirst of the associated communities. Spots such as Châteauneuf-du-Pape are a clear example of how a large religious presence cast significant impact on a wine growing region. Cluny was no different, in fact the Abbey at Cluny was the origin for four Popes and three Saints. According to The Burgundy Blog, “In 1321 the Abbey was consuming the equivalent of some 150,000 bottles of wine a year as part of its ordinary activities.”

Over time the Abbey changed hands from the Benedictines to the Cistercians and a part of the order revolted. As relationships dissolved and formed vineyards – as gifts to the church – were distributed throughout Bourgogne, under the care of various orders until the French Revolution displaced much of the ownership structures.

The influence of these ancient religious influences are still felt widely today, including in the Mâconnais region, north of Lyon, where The Abbey of Cluny resides. According to Visit French Wine, “In the far south of Bourgogne, where the first sensations of Provence can be felt, the Mâconnais district extends over 40 km and is bordered by the Saône River. Between the Côte Chalonnaise and the Roche de Solutré, Mâconnais is especially known for the high quality of its Pouilly-Fuissé and Saint-Véran wines” 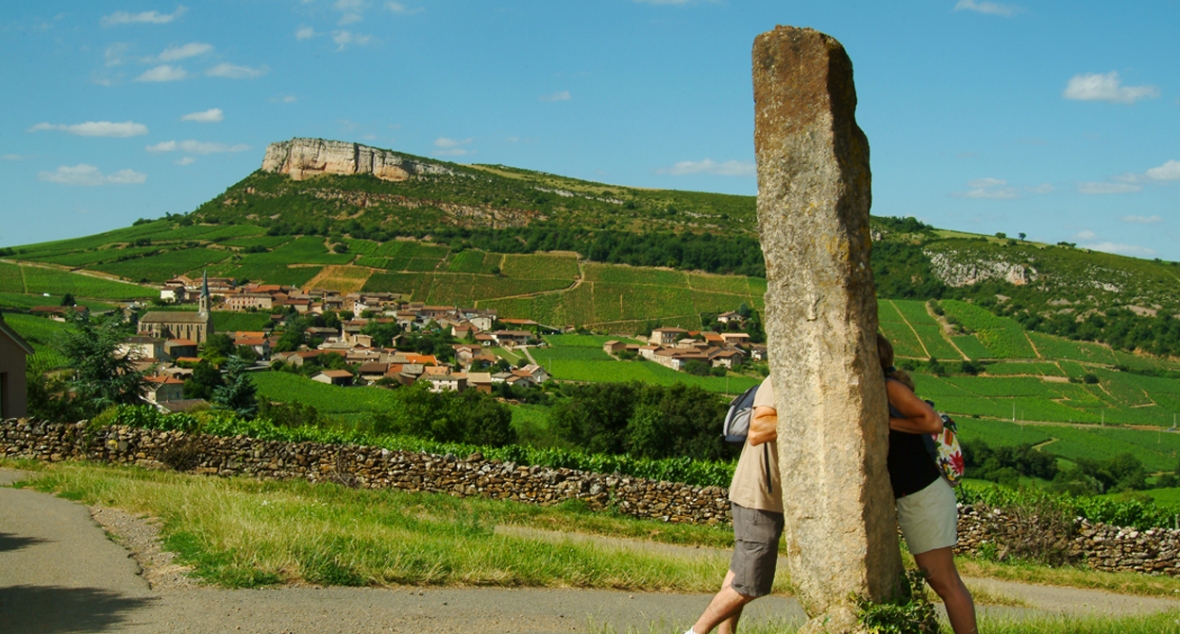 A neolithic formation keeps watch over the famous rocks of Vergisson and Solutré and their vineyards. Credit: Visit French Wine

According to the BIVB: “The Mâconnais white wines are the colour of white or yellow gold or straw-colored with gently glowing silvery or greenish highlights. To the nose, their aromas suggest broom, white roses, acacia, honeysuckle, fern, verbena, lemon-grass, and citrus fruits (grapefruit, mandarin oranges). In the mouth, the finish adds nuances of pine, quince and fennel. The impression on the palate varies according to each village and each terroir of origin. These wines are fresh and luscious as well as dry and well-fruited. They have good concentration backed by sufficient acidity to ensure their keeping qualities. They are full and smooth in character.

In colour the Mâconnais reds range from cherry to dark ruby via deep garnet. The purplish highlights are typical of the Gamay grape. Aromatically, they develop accents of small red and black fruits (gooseberry, bilberry) blended with notes of underbrush, mushroom, fruit-pit and animal. As they age, they evolve towards prune and pepper. They are rich, vital, hearty, fleshy, pontaneous, joyous, and easy to like. While still young they may be a little stiff but they will soften and become suppler with time. Both the wines structure and texture are excellent.”

The landscape is beautiful, with rolling hills and stunning rock formations, notably the Roche de Vergisson. Roche de Solutré. The vineyards are framed in a valley formed by two rivers, the Saône and Grosne. According to BIVB, “Limey or calcic brown rendzinas suit the long-keeping Chardonnay and Pinot Noir. Elsewhere, flinty sands and clays often mixed with calcium rich rocks or sandstone pebbles favor the ready to drink Chardonnay.”

If you’ve enjoyed learning about Bourgogne wines, then this is your lucky day! I’m part of a wine writer’s group called The French Winophiles and this month we conduct the second part of our Burgundy series hosted LM Archer from binNotes. This Saturday at 10am central, the #Winophiles will chat on twitter under our hashtag on the theme: A Virtual Tour of Burgundy, Part 2: Côte Chalonnaise, Mâconnais & Beaujolais.

Here’s the Tour Guide for Part 2:

Jeff Burrows of FoodWineClick serves up “Salmon and Morels with the Domaine Wines of Louis Max.”

Here on L’occasion we look back on the “Historic Vineyards of Mâcon.”

Michelle Williams of Rockin Red Blog regales us with: “A Journey Through Burgundy Part 2, Exploring Mâconnais with #Winophiles.”

Gwendolyn Lawrence Alley of Wine Predator takes on: “Bourgogne with Beef Bourguignon from an Instant Pot.”

Lynn Gowdy of Savor the Harvest steers us through “Navigating Southern Burgundy: Mâconnaise and Beaujolais.”

Nicole Ruiz Hudson of Somm’s Table schools us with “Cooking to the Wine: Jean-Marc Brocard Sainte Claire Chablis with Clam and Burrata Pizza.”

Wendy Klik of A Day in the Life on the Farm dips her toe in “Provence meets Burgundy.”

Link to the Virtual Tour of Burgundy, Part 1

The French Winophiles in 2017

Mai: A drive thru Bourgogne PART 1, hosted by LM Archer

Juin: A drive thru Bourgogne PART 2, hosted by LM Archer

Septembre: My French Wine Memory: Travel Stories from Wine Writers (pick your own!)

14 thoughts on “Historic Vineyards of Mâcon”