France’s Rhône River runs north to south, beginning in the Swiss Alps and eventually finding its way to the Mediterranean Sea. Populating its banks are world-renowned vineyards, divided into Northern and Southern designations, the latter of which includes the Lirac Cru.

In a valley where wines are classified by region – not variety – possessing this Cru designation is a key distinction, as there are only 13. Though Lirac was officially recognized as such in the 1940s, the area has been known for quality vineyards since the middle ages, famous for fresh, aromatic and structured wines.

The AOP – which includes the communes of Roquemaure, Saint-Laurent-des-Arbres, Saint-Geniès-de-Comolas and Lirac — produces red, white and rosé wine from 782 hectares. It is home to 44 domaines and châteaux, 18 négociants and 5 co-ops. Most of the producers here are in the family business, having learned their skills from their parents. The appellation’s website calls themselves the “sober and inconspicuous cru.” Also, “progress and humility are two core values.”

Lirac is the across-the-river neighbor to Châteauneuf-du-Pape, which is like living next to royalty—a heritage that can’t be duplicated. Generation after generation of comparison gets frustrating. But what if the time has come—a friendly revolution so to speak—when duplication and comparison no longer count? This is what de Pins feels is happening in Lirac, a fresh undertaking of the familiar processes of wine growing, making and selling.

From my story The Good Wines of Lirac (Palate Press).

Beautiful vines that are said to have been a ‘nursery’ for wartime vines, when soldiers brought back this-and-that from their travels. Interesting fodder for field blend enthusiasts. Photo Credit: Jill Barth

Since writing this story a new vintage has been released, and to introduce a fresh set of wines I think it’s also time to discuss Lirac from a travel perspective.

France’s hilltop wine towns and the surrounding villages and natural spaces are well worth spending your precious vacation days. They are arguably up to the standards of any wine region around the world.

Lirac isn’t the biggest village or most boastful cru, but it is substantial and visitors always pause at the comparisons with across-the-river Châteauneuf-du-Pape because CdP is so well-known that newbies to Lirac can’t help but wonder how did I miss this? Even CdP enthusiasts, those familiar with the elevated status of being a cru rather than Côtes du Rhône, are still puzzled by Lirac as if someone pulled a fast one on them.

Lirac is home to a mere 715 hectares of vineyards and annual production hovers around  23,000 hectolitres, that’s less than 2M bottles, just a teardrop’s worth equalling 0.5% of total Rhône Valley wine production. To benchmark: 770M bottles were produced in Bordeaux in 2016. And yet—there is enough to go around, Lirac is not too precious to obtain. You just need to know where to look…

…and why not look at the source. Back to the idea of a trip. Most visitors from the U.S. fly into Paris from there many wine travelers decide to pop over to Champagne or the Loire if they rent a car. Maybe Bordeaux or Burgundy if they are up for it. Add Lirac and her Southern Rhône neighbors to the list.

Readers of L’Occasion know I am a fan of the French road trip, and we’ve driven to most of the major wine regions in rental cars over the years. (Hint to my fiction friends: my second novel, underway, is the story of a modern marriage told through a road trip from Paris to Provence…)

But I understand not everyone wants to drive around on their vacation—for some people, that level of responsibility on holiday is a turn-off. Here is another reason why Lirac and its neighbors (in French they translate this into English as environs, which is apt) are excellent for a trip: the TGV into Avignon.

Now, I’m not one to give step by step travel advice, but you can get it direct, or with a Part Deux stop in Lyon, which happens to be one of my favorite cities in the world, so relish a long layover if you can. I’ve done both and it’s an easy way to travel.

Lirac vineyards above the village in sight below. Photo Credit: Jill Barth

For a holiday home on a vineyard (40 mins or so from Lirac) I can personally suggest Domaine l’Ameillaud in Cairanne—home to pretty damn good wines itself. You all know I love Château des Alpilles in St. Rémy-de-Provence and it’s really just a bit farther, down south about 45 mins. 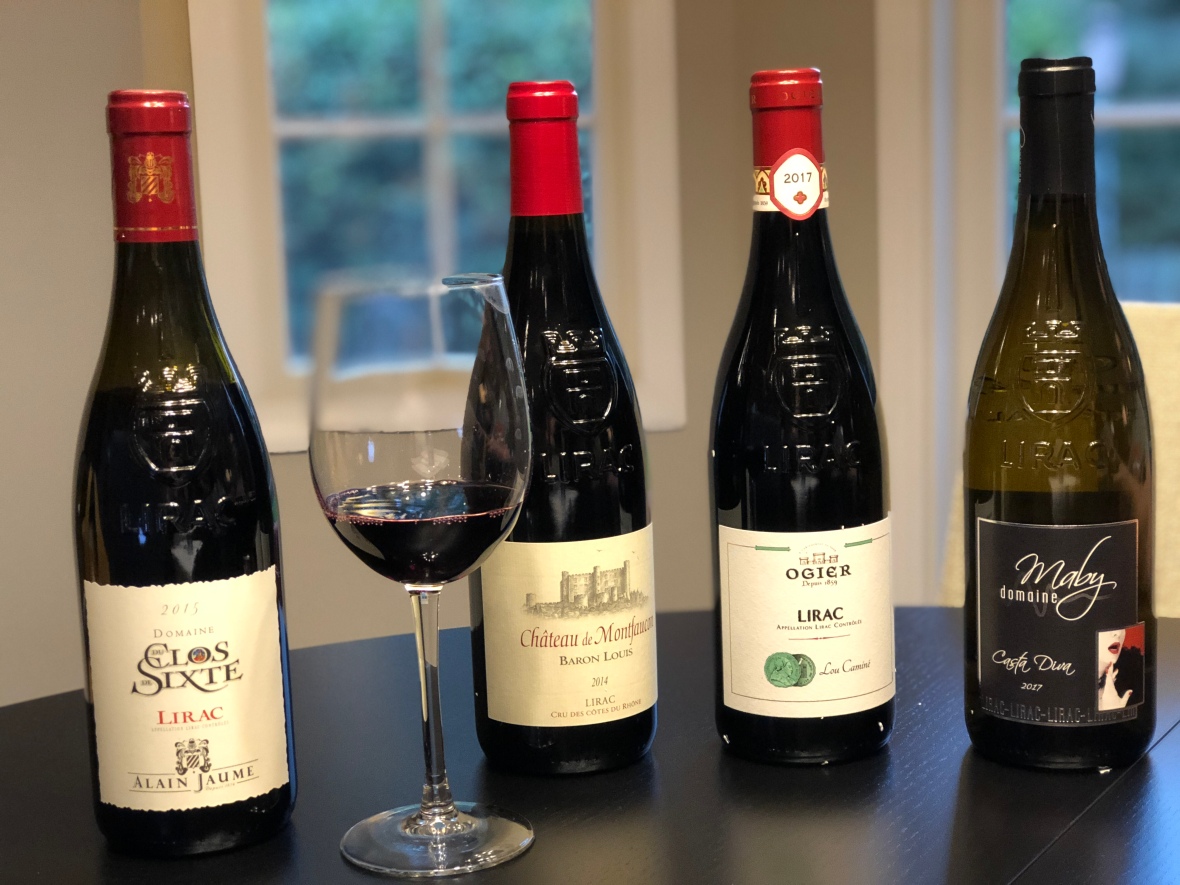 Domaine Maby Casta Diva Lirac 2017 ($28)
Clairette at 68% and Viognier at 32% come together in this rich white wine from the fourth generation of Maby winemakers, Richard and Natasha Maby.

Ogier “Lou Caminé” Lirac  2016 ($15)
Caminé: a sheltered, isolated place in the Provençal dialect. Here’s your Grenache, Syrah, Mourvèdre to age. A total steal at this price.

Posts from our other French Winophiles

Here on L’Occasion we go with “Lirac: Five Star Wine And Travel“

Jeff at Food Wine Click! shares “Lirac: Wine from the Wrong Side of the Tracks”

Please note that these wines were media samples, but all opinions are my own and despite the fact that I pretty much gush about these wines, no one paid me to do it—they are just that good.