Earlier this month, I lined up a set of wine bottles from France. Each one from a unique and stated region, each one bearing a label like a little luggage tag: here is my home.

To the French people, their government and producers indication of these regions is of the highest importance. While American consumers have grown accustomed to grape-name labeling, the prime designation for French wines is place. This is codified as a l’appellation d’origine protégée or AOP (previously AOC, which still appears here and there). According to the Institut National de l’Origine et de la Qualite (INAO), the ministry within the French government in charge of the regulation of French agricultural products classified by location:

“A terroir is a specific geographical area where production takes its originality directly from the specific nature of its production area. Terroir is based on a system of interactions between physical and biological environment, and a set of human factors within a space which a human community built during its history with a collective productive knowledge. There are elements of originality and typicality of the product.” 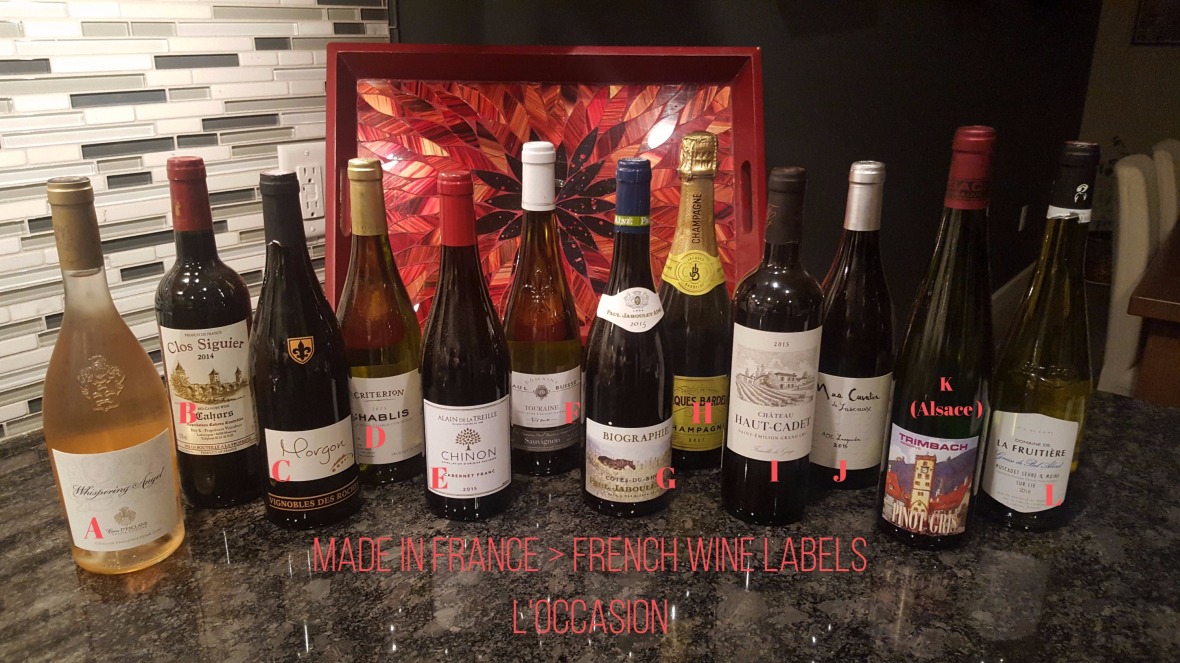 In the photo above, I’ve indicated a code to distinguish where location is indicated on each bottle of French wine. Credit: Jill Barth

I can look at the photo above and tell you where each bottle originated. Where it is grown, a general idea of the grapes used to make it, the style of wine…all of these things are apparent to me. How do I know? Because I’ve learned it. I’m familiar with French wine regions. I understand what it means to be Made in France because I’ve taken time to learn.

This is where some drinkers get intimidated – that seems like a big task! And it is true that it could be, but there are shortcuts. Let’s start with the easy one – Look at bottle H. Here it is, a bit bigger to help us out:

his label from Jaques Bardelot illustrations the elements provided on a French wine label. The back label has American regulations, as this bottle was imported to the USA. Credit: Jill Barth

One of the first things most of us learn about French wine is that Champagne must be from Champagne to earn the title. Champagne is a wine region in France, a place where proud and experienced wine grape growers and producers (called houses, or maisons) cultivate vineyards and make wine. They want the consumer to know that their bottles came from Champagne – nowhere else. That is why the label is so essential. Not made in Champagne – no label. It must be called something else (stay tuned for an upcoming post all about sparkling wine…for now, that is a rabbit hole).

Most consumers around the world know about Champagne – it is recognizable for what it is. What may be lesser known is that Champagne wines must contain certain grapes, Pinot Noir, Pinot Meunier and Chardonnay (this happens to appear on the Bardelot back label, though not required. Note, this is in English and situated in a spot with American regulations. Americans appreciate varietals on the label.) Besides indicating place, AOP or AOC very often symbolizes the varietals included as well, this is because the AOP cahiers des charges are written rules, so to speak. Each region at some point decided what their AOP meant, sort of like a mission statement. Some are broad and others are highly specific.

Some AOPs cover big ground, these are more general and likely to appear like an umbrella policy over a swath of area. Some AOPs are drill-downs right into a set of vineyards or parcels. This is all arranged between the growers/produers and the government based on terroir, the elements that make each region unique. I’ve seen the binders of paperwork required to officially establish or alter an AOP – it’s mightier than my high school son’s backpack crammed with textbooks. We’re talking heavy and substantial, with rounds of heavier and more substantial in between. But, it gets done and in the end, it is a benefit to both the producers and the consumer. According to INAO, as of data dated 2015, there are 366 wines (includes a few eaux de vie) and 441,200 hectares of vines under AOP designation in France. I’ve actually met a vigneron that told me he’s traveled to (often by backpack) each one. Here is your challenge, learn all 366! Nah, just kidding. Let me help you out with a few regions, indicated by alphabetical code from the image above:

Wine Map of France with codes indicating the bottles above. The names are directly on the labels, so placing their origin is simple. Except for Alsace… Credit: Jill Barth

Pay special attention to bottle K, from Alsace. They do things a bit differently there. The label indeed does indicate the varietal, Pinot Gris, and the producer, Trimbach. The appearance of the varietal on the label is significant, normally not allowed in France but a part of the culture over the border in Germany. Alsace is a region flowing with German influence, in fact, it has previously been a part of Germany and these traditions and methods still hold sway. An exception to the rule, wines from Alsace bear a unique label format and many times, a uniquely shaped bottle as seen in the image above.

All of the wines shown above are imported to the US and available at Whole Foods Market. This month marks their #MadeInFrance event and to celebrate they feature these wines paired with French cheese, which is also produced and labeled under an AOP system. Find this selection at your local Whole Foods, an opportunity to try several regions’ bounty of vin et fromage:

Full disclosure: The wine and cheese discussed in the post were provided as complimentary samples. Any opinions expressed here are entirely my own.

9 thoughts on “What Does it Mean to Be Made in France?”